Bees, elephants, and people—what do they have in common? In the western part of Uganda on the edges of beautiful Kibale National Park, all three are finding a way to share resources and the living space they need to survive.

I founded the Bee Keeping Project in June 2013. It is a new approach to land-sharing that aims to create harmony in the face of intense competition for resources and potential conflict.

The African elephant requires large areas for browsing and foraging whilst people need land to grow food. Elephants raiding crops have been killed or injured. The African honeybee has been in decline, apparently due to habitat loss largely caused by humans. The park has a responsibility to protect the animals but this brings them into conflict with local communities. 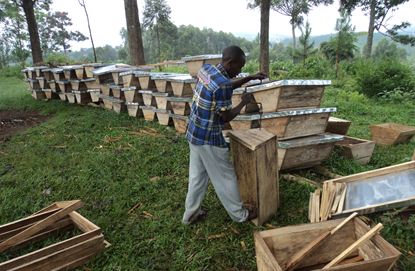 Following their training, 500 improved bee hives in total were made by local craftsmen for distribution and colonisation; the carpenters are now making hives for other parts of the country.

Is it possible to find a ‘win-win’ solution for all?

The Bee Keeping Project in the Kibale forest area has distributed 500 bee hives to neighbouring communities. To date, over 200 of these hives have been colonised, and positioned at selected elephant crossing points along the park boundary to create a “bee-fence.” Elephants, it turns out, don’t like bees!

When an elephant bumps the structure, it disturbs a hive which sends a ripple effect along the fence to alert the others. The sound of their collective buzzing, and their stings, make the elephants retreat back into the forest—safely away from the farms.

The bees have access to a 966 km square area of parkland in Kibale National Park and flowering crops in the surrounding fields that supplement their natural food sources.

The importance of bees

Wild honeybees are major pollinators of both natural flora and agricultural crops—playing a crucial role in both ecological wellbeing and the agricultural economy in the area. New hives are sustainably sourced from local native honeybee species, contributing to their genetic protection.

Relying on the native population is only possible if that population remains healthy and buoyant in the wild, so by the bees becoming an integral part of a wider ecological and economic solution, such as the bee fence, it is hoped their wellbeing and conservation profile will also be raised.

Benefiting people – as well as wildlife

Uganda is famous for its stunning natural diversity and wildlife reserves, and the Ugandan Wildlife Authority is working hard with stakeholders to ensure the park land areas are sustainably protected.

However, for local people who traditionally farmed, hunted, and gathered resources from the now protected area, this has come at a cost. Finding alternative ways to access food and other resources causes tensions and conflict with the land and the wildlife authorities. One of the best ways of managing this conflict is to engage the local people in efforts to protect the park and wildlife through the sharing of the roles, responsibilities, and benefits of conservation.

The Bee Keeping Project appears to be doing just this. Not only are elephants being redirected from crop land back towards the protection of the park, but the local communities are directly involved in managing and sustaining the solution.

Local community bee-keeping groups have formed the Busiriba Beekeepers and Conservation Association (BBCA) to promote bee keeping and protect elephants and their forest habitat—and sell the honey for income generation to alleviate poverty.

Since the project was established, studies show a drop in crop raiding by elephants from 44 in 2012 to 12 actual and 3 attempted raids in 2015, 11 in 2016 and 7 in 2017. This is compared to 17 raids since January 2017 on a stretch without bee hives or trenches. So it looks like the bees are doing their job effectively!

There is also a marked reduction in incidences of illegal activity such as poaching and logging along the project site, with some support from community partners being instrumental in alerting/reporting potential poachers to park management. 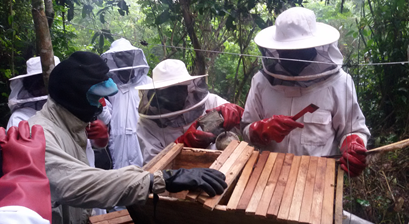 Over 390kg of honey has been harvested by the cooperative association.

Next steps towards a sustainable solution for all three species

There is a considerable amount of work still to be done to ensure sustainable outcomes, increase the market for the honey, seal remaining gaps in the park boundaries, provide further training for the community, and include beekeeping in annual operational plans for sustainable conservation for the area.

Further research and monitoring is required to generate the data needed for determining the overall project impact, benefits and issues arising for the elephants, bees, park and local communities.

It is clear that sustainable solutions—not to the detriment of one species over another—are worth aspiring to, wherever in the world they are. Maybe the Bee Keeping Project in Kibale is one example that will show us the way. 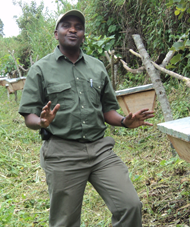 George in Kibale National Park with bee hives in the background.