Could you imagine a day without coffee?

A dog may be man’s best friend but coffee is the brain’s best friend!!! There is nothing better than that first cup of coffee in the morning to get the brain going.

So today I want to celebrate the coffee heros that grow the coffee and spread so much joy to the world. Coffee is the most popular beverage and has a lot of interest globally. In total, about 160 million bags are produced annually to meet increasing demand globally. About 12.5 million families grow coffee in different coffee regions across the world. Smallholder farmers produce about 60% of the world's coffee production. These smallholder farmers live predominantly in 20 countries where the climate and soil are suitable for growing coffee. Almost half of these smallholder farmers can be found in Ethiopia (about 2.2 m), Uganda (about 1.8m) and Indonesia (about 1.3m), while Vietnam, Burundi, Kenya, and Colombia each have over 500,000 farmers. The majority of coffee farmers living in poverty are concentrated in six East African countries. These countries account for approximately 63% of the world’s coffee farmers living in poverty and 71% living in extreme poverty. The region is characterized by low coffee yields that result in low income to these farmers. Low coffee yields are generally solvable through simple and organic means, such as pruning and stumping of trees - however these methods require targeted and systematic training programs. I was born in one of those countries – Kenya. As a child growing up in the 90s, I saw my grandparents proudly farm coffee. During school holidays, all my cousins would visit them and particularly in the Christmas break we would help in picking the coffee. The more containers one picked the bigger the share of macadamia (the choice of payment treat!) one would get. It was a fun way to keep us children engaged while teaching us the value of hard work. Later in the day we would take the coffee to the factory for processing and that was a village affair. We would meet all our friends from the village and would be there for hours until very late in the night sometimes. Later I came to understand that this was due to processing challenges such as machine breakdown, power outages, inadequate labour, and lack of water among others. Back then it did not matter because we were having fun. After New Year’s, when it was time to go back to school my grandfather ‘guka’ would go to the cooperative to ‘get school fees’ for my uncles and aunties who were still in school and a few days later they would report to school. Those days were particularly special because guka would also return with biscuits. I remember thinking the whole coffee process was pretty cool and amazing. Coffee farming was treated with so much pride and respect. My story is similar to many other families that have proudly grown coffee. From the coffee incomes families were able to educate their children, pay hospital bills, buy a car, and build a home among other major investments in the home.

By the time I was done with school and visited my grandparents a decade later, there were many other activities on the farm and it felt like coffee had been put on the back burner. I could not believe that days would now pass without grandpa going to the coffee farm. Picking was now being done by workers and for fewer days since it is not a lot. 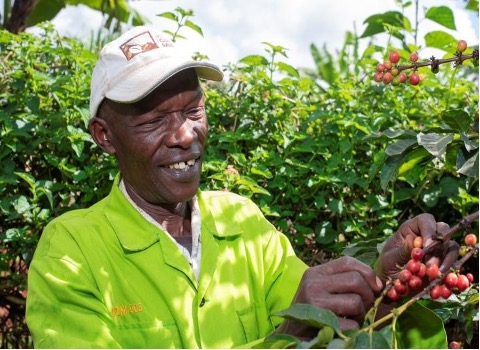 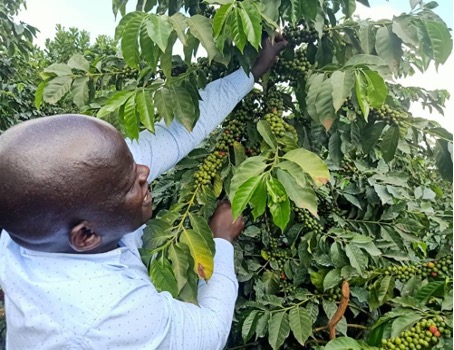 Currently I work in the coffee value chain and have since gained insight on this feeling. Coffee production in Kenya has plummeted from a peak of 130,000 metric tons in 1987/88 to barely 40,000 metric tons in recent years. While there are over 600 cooperatives only about 450 cooperatives are active and their volumes have reduced so significantly they are struggling to remain afloat. Farmers have continued to face a wide range of challenges with coffee farming including low income due to low farm gate prices, low farm productivity, lack of adequate extension services, high cost of production, small size of land with competing interests, lack of farm inputs or inappropriate use, climate change effects, cash flow problems and lack of finance. The value chain is also facing a number of challenges including low volumes, inconsistent quality, inadequate infrastructure, high costs of processing, GHG emissions and lack of traceability. Despite these challenges, 12.5 Million families continue to grow coffee the world over. Of these families, I am working with 210,000 providing them different services that help them continue growing coffee. On day to day basis I interact with these families and listen to them talk about coffee as proudly as I remember my grandparents do. In order for them to continue doing so we must jointly have the conversation on sustainability in coffee. Coffee sustainability has been on the fore front in most companies, coffee workshops and conferences the last couple of years. There have also been several initiatives that hope to achieve sustainability in coffee. These have mainly taken three forms including direct sourcing models through which roasters buy from farmers, certification standards such as Rainforest Alliance, Fairtrade, UTZ etc. and development of social programs for farmers in coffee producing countries.

Most if not all of us want to continue enjoying our cup of coffee while ensuring that the heros that produce the coffee have a decent livelihood. Recognizing the diversity and magnitude of farmers contributing to our coffee each day is the first step to responsibly sourcing this coffee.

True sustainability in coffee supply chains needs to start with identifying and addressing the challenges and behaviours of coffee farmers in each origin. This is particularly urgent as the farmers start to face new challenges such as climate change.

A world without coffee is a grumpy world. Have a coffeestainable day!