How to Achieve a Sustainable World

A few months ago, I watched David Attenborough’s documentary “A Life On Our Planet”. The data shown about the decrease in wildlife species and increase in deforestation over the last decades worried me. From 1937 to 2020, the world population increased from 2.3 to 7.8 billion, while the remaining wilderness decreased from 66% to 35%. In such a short period of time, humanity cut down more than 3 trillion trees around the world, devastating half of the rainforests, consumed 30% of the fish population, reduced the size of the freshwater population by over 80%, and turned half of the fertile land in the world into farmland.

Increase in population and decrease in percentage of wilderness from 1937 to 2020.

Along with the catastrophic data, Sir David presents his vision to prevent this scenario, basically an alternative to reverse some of the damage done. In my opinion, it is a compelling and seminal plan that is worth sharing with as many people as possible.

The main goal is to restore the world’s biodiversity, to “rewild” the world.

To achieve this we need to stabilize the growth of the world’s population.  A challenging task in itself. The world population in 2021 is 7.9 billion people, and by 2100 it could reach up to 11 billion. However, according to the UN, by 2099 the population growth rate should be around 0% in more developed regions and less developed regions. Still, will that be enough? Probably not, unless we do something to accelerate this process.

We might ask ourselves: what is this sustainable level? What is the maximum population that can be sustained on the natural resources available? If we consider the Earth Overshoot Day in different years, that is, the day of the year when we have used up one year’s supply of the planet’s nature, 1970 was the last year when humanity lived within Earth’s capacity. It is estimated that by 2050 we will use up twice the Earth’s capacity, unless we do something to change it. Today the number of Earths needed  to provide resources and absorb our waste is 1.79. Doing a simple rule of three, considering population versus “number of Earth’s”, a sustainable population should be around 4.4 billion people. Still, this is a non-scientific calculation and more data should be taken into account to determine a precise number.

The population growth rate varies according to the development level of a region. The rate is bigger in less developed countries, therefore an increase in development should bring about a decrease in birth rates. But how to increase development without its consequential environmental impacts? One way is to go renewable. Using only renewable energy should be one of the main goals of all countries. Nature provides us with many “eternal” and cheaper energies like hydro, solar, and wind which should be prioritized over nonrenewable ones. 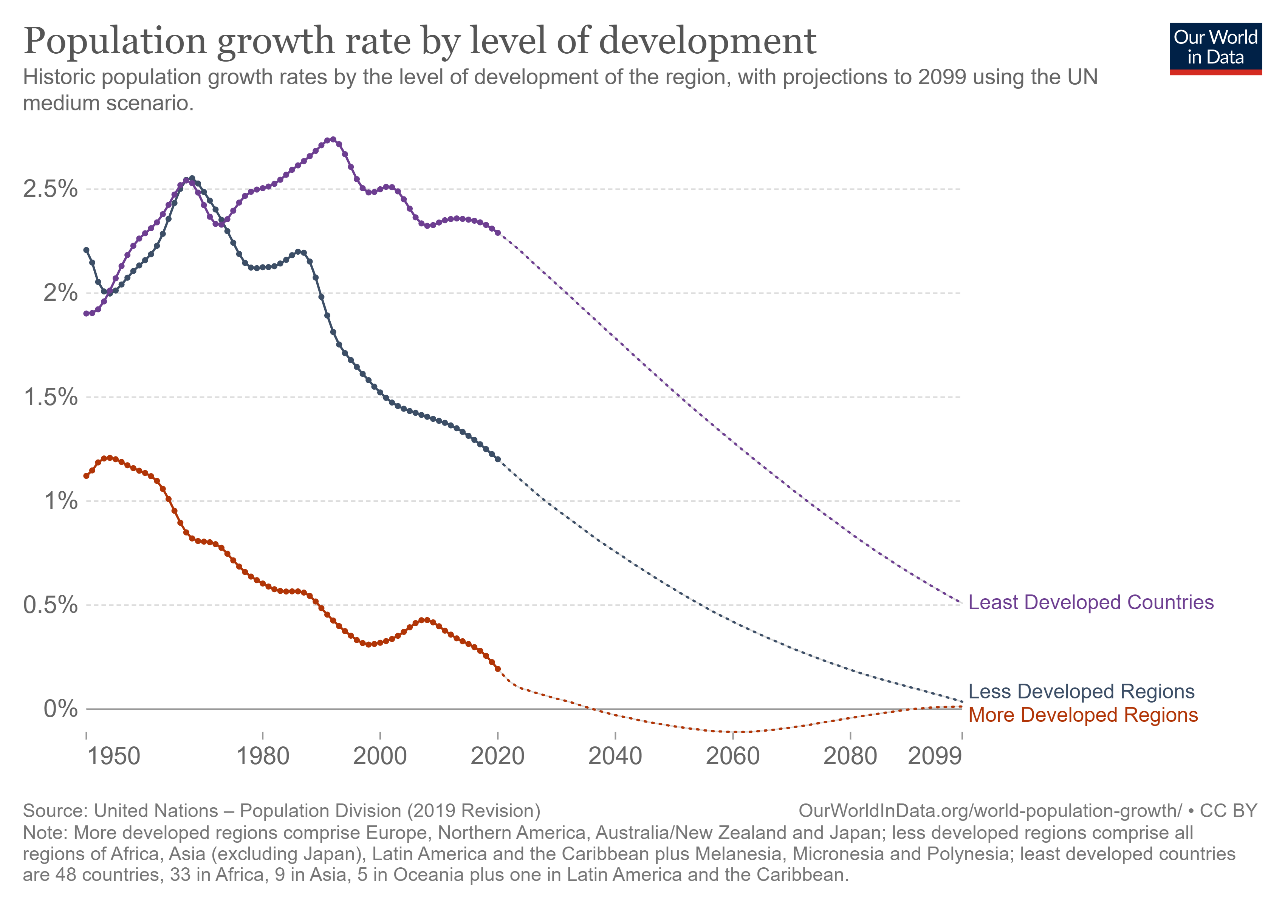 There is also a need to create healthier habitats for marine and terrestrial fauna. That can be done by creating protected areas with restrictions on hunting and fishing so that these areas function as nurseries to provide resources to surrounding areas. The healthier the habitat the more resources it will be able to provide. As long as people know how to utilize it while allowing the environment to recover, more resources will be available.

Another step is reducing agricultural areas to preserve spaces for the recovery of the terrestrial wilderness, giving more land for large mammals to survive. Changing our diet is paramount. If our population had a plant-based diet, we would only need half the land we use to farm and could invest in increasing yields, or producing more in less space.

By doing so, we would make more space available for forest preservation, the creation of habitat for flora and fauna, and carbon sequestration. We should avoid deforestation everywhere, which requires producing only in areas that are already deforested.

All this can look too broad and unattainable, but to tackle these issues everyone needs to play their part.

Banks and investors have a crucial role in this solution and should stop backing nonrenewable energy projects and demand more effective environmental measures regarding deforestation and environmental protection.

On a small-scale we must apply the same objectives in our daily lives: reduce our consumption, change our diet, buy local to reduce transportation emissions, and reduce waste generation. Overall, being conscious of the impact of our choices in nature, beginning with the food we eat and the goods we consume. Being aware of their origin as well as the effects of their production, and the destination of the waste generated after consumption. As consumers, we also have the power to pressure larger companies for more sustainable production methods.

In the 70s, when the first images of the Earth from space were taken, humanity noticed that we were all in one place and that we had limited resources. In 2019/2020, with Covid-19, it was clearer that actions taken in one place can affect the whole planet very fast. In the late 60s, we discovered our limited resources, with the pandemic we discovered that we are all connected. Boundaries are abstract and solving global problems involves global effort to make it work.

We should remember that: “This is not about saving our world, it is about saving ourselves.” (David Attenborough). Nature will regenerate with time, but will we save ourselves from extinction or from striving to survive in an uninhabitable world?