Rainbow Warrior Sails to the Sun

I arrived in UC Berkeley this summer to attend the Beahrs Environmental Leadership Program right after a tour with the ship MV Rainbow Warrior III along the shores of Cyprus to get ready for our upcoming Greenpeace Mediterranean "Sail to the Sun" Campaign.

Rainbow Warrior, one of the three Greenpeace ships (the other two are Arctic Sunrise and Esperanza) is one of the most environmentally friendly ships out there and designed specifically for the mosst efficient campaigns. And as the campaigner on board, I can easily confirm to the saying that Greenpeace ships are dream tools for campaigns. Every time I am on board, my belief that another world is possible juist gets stronger, just like meeting all the great people during the ELP this summer did. There are so many people out there committed to the well-being of our planet.

Rainbow Warrior is offering a platform for such peple to raise their voices, calling for a better future. Rainbow Warrior, which inspires millions of people on Earth with its non-violent methods of action, this time invites us to unite and raise our voices for the biggest natural resource in the Mediterranean, the sun. This is the first ever solution-oriented campaign in Greenpeace Mediterranean.

We believe Turkey is at an energy crossroads. The decisions that will be taken now will affect the country, its population and the planet in general for decades to come. The existing plans for 80 new coal-fired power plants or three new nuclear power plants is not the way to pursue a forward-facing energy future. Instead of investing in old, dirty and expensive technologies, we believe Turkey should invest in solar, wind or geothermal since it already has the potential to be a world leader in these clean resources.

The objective of our campaign is to equip one million rooftops in Turkey with solar panels. In 2015, we developed an action plan for this transition in our Energy [R]eveolution report. Turkey first has to gradually stop using coal, and stop investing in nuclear power plants, turning to renewable energy sources instead. Energy efficiency practices should be developed to help economic growth and maintain energy independence. We, with this campaign are aiming to increase solar power to 6 GW in the next 3 years. Half of this installed power could be generated from small-scale systems (under 50 kw capacity) to economically help people and local communities - this is the purpose we propose to achieve. Our vision is to see 1 million rooftops with small0scale installments (average 3 kWp) to reach 3 GW installed solar power in total by 2018.

Solar power will be crucially beneficial for Turkey both in macro and micro levels. As a local resource, it will help decrease the current foreign trade deficit. It will help the neergy independency of the country because it involves no fuel cost. It will also generate new employment areas - it is identified by the International Renewable Energy Agency as the industry with the potential to create the highest amount of jobs.

We started our tour in Bodrum on September 6th where we help open boats, kids' activities and a tourism stakeholder meeting. We are now setting sail from Seferihisar to arrive on our third stop Çeşme. Seferihisar is one of the Slow Cities in Turkey and the Mayor, Tunç Soyer is one of the prominent figures with their solar investments in their municipality. We will have another stop at Bozcaada before reaching Istanbul where we will stay until September 26th.

Rainbow Warrior III will then be travelling Morocco to take our sun stories to the United Nations Framework Convention on Climate Change Conference of Parties, also known as COP 22. We want the government officials to be inspired by the stories of individuals, local governments and businesses in their region and commit to more ambitious implementation of the climate agreement reached in Paris last year. 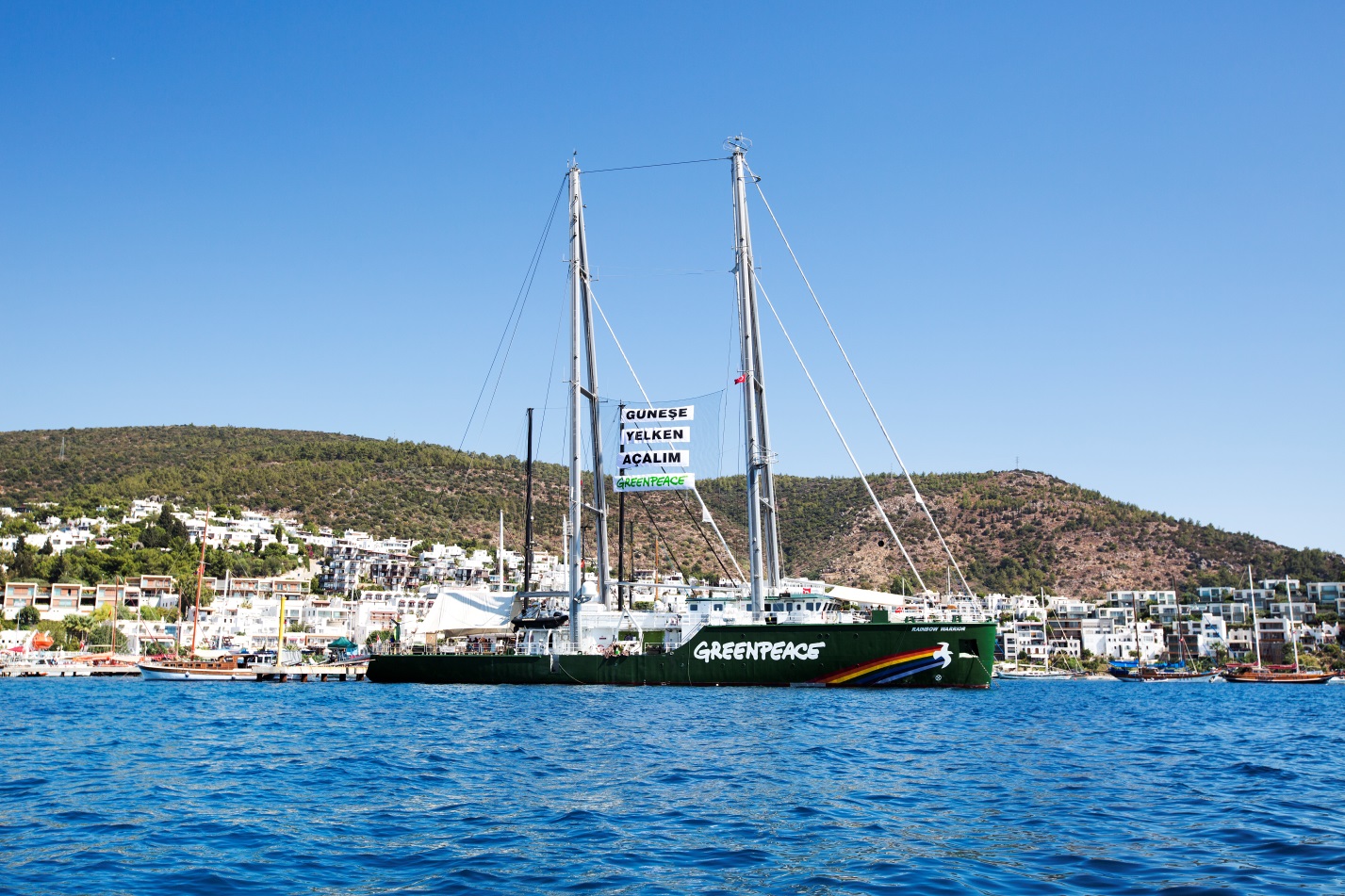