The science and understanding of climate change

I would like to provide my perspectives on science and the understanding of climate change, after hearing the lecture delivered by Prof. David Roland-Holst on climate change at the Beahrs ELP 2016 class.

I really think climate change is one of the most daunting issues faced by mankind. It is global in scope and its impacts span national boundaries and decades, bringing along with it a multitude of problems in different areas. Positions and opinions on climate change are polarized with both supporting and opposing views. On the one hand, mountain glaciers are disappearing, the Arctic coast is melting, sea levels are rising, and average global temperatures are on the uptrend - all leading to the increasing occurrence of severe natural disasters. Cynics, however, question the existence of climate change. Interestingly, some even find it to be beneficial. Farmers in some places are happy with the longer growing seasons, while shippers hopefully await the year-round opening of the Northwest Passage with the melting of ice in the Arctic. On the downside, in other parts of the world, plans are being made to abandon low-lying coastal areas and tropical islands as they continue to sink into the oceans.

While it is widely accepted that the world naturally has variable weather by itself, is it likely that the recent changes in weather patterns are impacted by human-induced climate change? If the answer is no, then what is possibly causing it? And if the answer is yes, do we know how the future climate will be, compared to the climate impacts that we are seeing today? How reliable is the science that is used to define the climate change phenomenon? These are some of the basic, but pertinent questions in place.

The world's climate has always been changing on a natural basis, but compelling evidence from around the world indicates that it is also caused by anthropogenic factors. Most international bodies with expertise on the matter have stressed upon the influence of human activities as direct cause to climate climate. For example, the United Nations Framework Convention on Climate Change (UNFCCC) defines it as change of climate that is attributed directly or indirectly to human activity that alters the composition of the global atmosphere and which is in addition to natural climate variability observed over comparable time periods. The Intergovernmental Panel on Climate Change (IPCC) attributes it to "any change in climate over time, whether due to natural variability or as a resuly of human activity." The National Academy of Sciences report on Climate Change Science: An Analysis of Some Key Questions highlifhted that "greenhouse gases are accumulating in Earth's atmosphere as a result of human activities, causing surface air temperatures and subsurface ocean temperatures to rise." This view is further shared by the American Meteorlogical Society, stating that there is compelling evidence of human modification on climate.

Climate change is however a very complex issue. To be able to determine the risk of anthropogenic climate change, an assessment of the multifaceted factors involved is required. These can range from science to economics to policy. The following figures from NOAA show the major indicators, in addition to other available studies showing alterations observed in the climate, including change in the rainfall distribution patterns and an increase in the frequency of severe weather events. 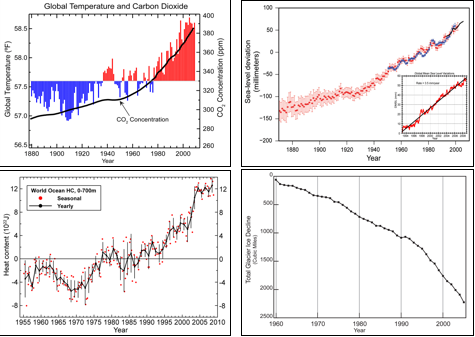 Although the scientific consensus is clearly expressed in the IPCC reports, this is often an argument used against adopting measures to reduce emissions by certain parties. Some corporations, afraid of depleting revenues from the adverse effects of controls on carbon dioxide, alleged that there are major uncertainties in the science used to describe the phenomenon. Despite the widespread public recognition of climate change, it is interesting that these statements sometimes end up to be far more powerful forces than the scientific findings. Perhaps this is because climate change is an issues that is difficult to connect with in a tangible way at an individual level. Also when dealing with climate change, to some extent, funding opportunities have been argued as the motives of scientists. However, these attacks on scientific credibility have been interpreted by the scientific community as alack of understanding of science by the public. Perhaps if the public were better educated, they would understand its benefits more and at the same time be more accommodating in their response. It is generally acknowledged that the longer it takes to respond, the greater the damage and the higher the costs would be in addressing climate change-related impacts. Changes in climate will affect photosynthesis, plant respiration, and organic matter decomposition. All these are matters of concern as they influence the global land-atmosphere carbon flux. The impacts of warming will be felt in many sectors of society, including agricultural production, and water availability, on health and on mere subsistence of low-lying islands and coastal zones. Scientists have also raised concerns on an increase in frequency and magnitude of extreme weather events and disasters due to climate change, and the fact that developing countries will be more vulnerable as their fragile economies would be harmed more by such events.

There is also ample evidence of the potential ecological impacts of climate change, ranging from polar terrestrial to tropical marine environments. There are for instance evidences suggesting that climate change will have adverse impacts on the functioning of marine ecosystems, especially on fisheries production. Research has shown that climate change will impose greater stress on natural resources (along with the other threats such as overexploitation and pollution), and this will likely lead to a reduction in the resillience of populations and their habitats. With such dire consequences threatening the survival of almost all living creatures, it would be a negligent of the global community to make no attempt to address the issue.

Consequently, worldwide efforts to tackle climate change began since the 1980s. Even then, the global scientific community agreed that the issue was significant enough to warrant action to curb greenhouse gases. Following to this, the IPCC was established by the World Meteorological Organization and the United Nations Environment Programme in 1988, and it serves both as an intergovernmental body and a network of the world's leading climate change scientists and experts. Its main objectives include carrying out assessments of causes of climate change, impacts and vulternability, as response strategies.

Although widely portrayed as a disappointment due to the lack of progress towards a binding global climate treaty, the Copenhagen Accord reached at the UN climate conference in December 2009 had developed and developing countries pledging to cut their greenhouse gas emissions, emissions intensity or emissions relative to baseline. Following to this, the United Nations Climate Conference in Cancun, Mexico in 2010 discussed the issue further. The Paris Agreement is the latest to the list.

Despite the impacts from climate change, little has been achieved and this is partly because of the complexity of the issue itself. There is no definite solution to it, not at least which will not affect the economy, in one way or another. For example, the consumption of fossil fuels seems to be a prerequisite to development. Climate change from fossil fuel combustion is arguably the most challenging environmental issue faced because carbon dioxide emission is at the heart of how energy is being produced. In recent times, much of the debate has somewhat focused on the upfront costs of emission controls, and very little research on the 'costs of inaction.' For example, the more serious questions to answer now would be: how would a failure to reduce greenhouse gases make response and adaptation more expensive?

There is a need for more effective climate change communication approaches to encourage not just governments, but also individuals to engage meaningfully with climate change. This would also play a role in influencing policy makers on the significance of the issue, and why urgent action is required.