Understanding and Harmonizing Social Forces: From a Climate Risk Perspective to the Peaceful Resolution of Environmental Conflicts

In a previous newsletter (Winter of 2017 to be precise), I reported to the ELP about the urban risk conditions in Bogota, Colombia, and the resistance raised against the public policies for risk management that entail population resettlement, arguing that this measure reflected a limited understanding of the social fabric of risk.

Some water has gone under the bridge since then, and during my doctoral research I have encountered that, in part, interests, intentions are key determinants in configuring the dangerous landscapes that I asserted to be misunderstood. Other academics and practitioners have expressed similar findings (check for example Eakin, et al., 2017)¹.

The fact is that social forces oriented by interest or intentions drive spatial distributions with  substantial impact on what we refer to as climate risk, as the biophysical determinants of these risks have (e.g. rainfall level, soil composition or gradient of slope) (Picture 1). 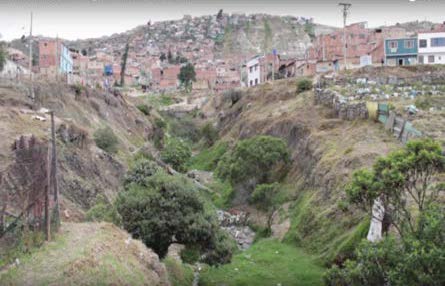 Picture 1. Violence, social segregation, environmental liabilities, and a lack of public and private investment characterize the climate high-risk areas in Bogota, suggesting that this dangerous landscape has much to do with the externalities of economic cycles, political interests, and social struggles (Image taken from “testimonies of Arraigo” (Hita, 2015), available at https://youtu.be/_wqwSrKy4uI)

From an approach to risk based on biophysical drivers, the emphasis is placed on measures to control these factors, or avoid them, as in the case of resettlement. But considering social forces as constitutive drivers will lead us to enhance our risk management toolbox and develop mechanisms directed to expliciting these forces to harmonize their impact over the space.

Social and political forces acting explicitly and in coordination will drive sustainable improvements over urban space. Without considering these forces it is hardly possible to protect long-standing positive physical interventions from their conflictive pulse.

Under this theoretical approach, some concrete initiatives promoted in Bogota (in parallel with the relocation trend) are being reviewed. Community involvement, circularization, food security, empowerment, appropriation, and artistic expressions become not merely accessory focuses to ease or enhance territorial interventions, but direct mechanisms of impact to awaken and synchronize the social and political forces capable of transforming the territorial reality of dangerous landscapes (Picture 2).

Picture 2. “The living forces in society transform the dangerous landscapes into resilient territories”. This phrase underscores the approach explained at the end of the audiovisual piece “Sowing Resilience” (RECNET, UNESCOSOST, 2018), available at https://youtu.be/pxqqJuIGoIw)

This debate can be extended from climate risk to the general problem of socio-environmental conflicts. The government of Colombia and one of the oldest left-wing guerrilla groups in the world, denominated FARC recently signed a peace agreement widely disseminated. It was recognized that the origin of the violence lies in a misunderstanding of social forces, their mutual underestimation and the dominance or segregation being carried from the structures of power in the economy and the State. From my view, these results would be reflected in dangerous landscapes.

A peace agreement is a social mechanism that acknowledges the forces in conflict, conceding them a sort of legitimacy intended to integrate them into legality with a common will. It should be highly appreciated, supported, further intensified, and replicated over the subnational and local scale. This constitutes a social challenge upon which ultimately relies, in my opinion, the sustainability of Colombia.

The UNESCO Chair on Sustainability of the UPC has accompanied local efforts in Colombia to pilot adaptive methods with innovative perspectives and has recently assumed a shared coordination of a platform called BIOPOLIS, which groups some subnational universities in Colombia with international partners across South America and Europe.

Biopolis emerged in 1993 supported by the United Nations Environmental Program (UNEP). It has tradition and local engagement enough to increase opportunities for impact on processes of “territorial healing” in Colombia and for the peaceful resolution of environmental conflicts, accounting for the heterogeneous forces of our society.

The ad hoc president of Biopolis, professor Luz Stella Velazquez, has recently announced that among the priorities of her five-year agenda are the environmental challenges of post-conflict Colombia. As a doctoral researcher assigned on these topics to the UNESCO/UPC Chair, I celebrate this partnership just reached with Biopolis. Despite the enormous environmental issues we are facing, societies are seeking to organize ideas and alliances for improved human action on the planet Earth.