“Do you know how many types of ‘pwason kato’ (parrotfish) there are? How many species? There are over 100 species. They (hotel operators) don’t even know how many ‘lapas’ are there in the Balaclava Marine Park, BMP, what types of ‘ros’ (rocks) are in the BMP (“ros manuel, souval, parasol, plat”) We know which areas the whales, turtles and dolphins visit the BMP. We can tell the tides by looking at the moon. I want to share my knowledge of the sea to re-build a sustainable Mauritiu” (Balaclava Marine Park, BMP fisherman)1

“There were no hotels, or a road in the BMP, there used to be a ‘laliann’ called ‘laliann san finn’, it grew on the beach, it doesn’t have any roots or seeds. Today you can’t even find a piece of them anywhere in BMP due to the hotel developments. All the ‘ros’ in the BMP lagoon have changed.  There was a ‘laliann batatran’ that stopped erosion. You used to have a rock and coral barrier that prevented erosion from high tides. Today, this is no longer here due to the hotels” (Balaclava Marine Park, BMP fisherman)2

‘lapas’: boat pass in the lagoon, gap(s) in reef 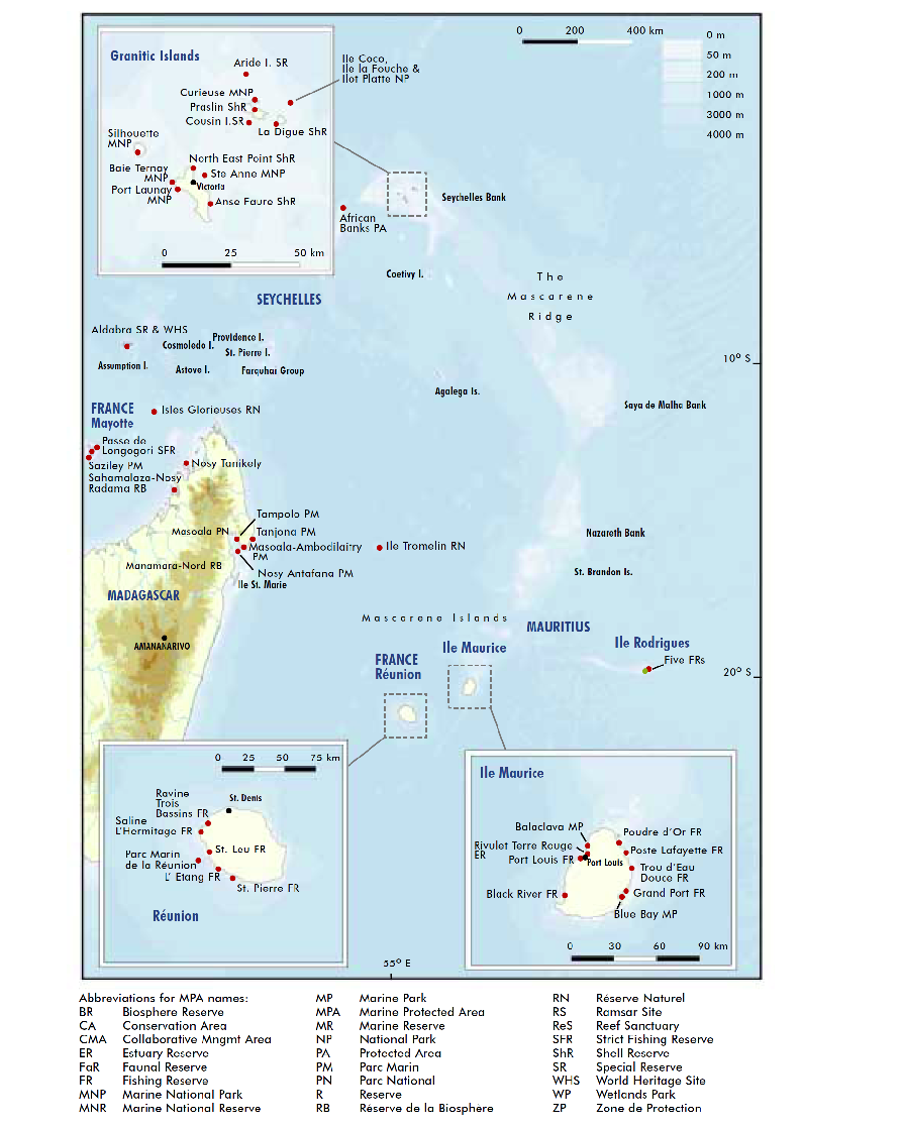 In SIDS such as Mauritius and Rodrigues, biodiversity provides the building blocks for marine, coastal ecosystems and the foundation for the islands’ economy (e.g. fisheries and tourism), culture and traditions (Stock, 2014; UNDP Mauritius, 2021).

The islands are ecosystems of global significance but they are at risk and marine biodiversity is threatened (WRI, 2011; Secretariat of the CBD, 2021; Stock, 2014; UNESCO, 2021b). The Mauritian islands’ people livelihoods are directly dependent on these fragile marine ecosystems for food, income, and coastal protection (WRI, 2011). Thus, protection of the islands’ marine biodiversity and ecosystems is essential for sustainable development (Secretariat of the CBD, 2021; Stock, 2014; UNESCO, 2021b).

Mauritius and Rodrigues coastal communities have built strong links to their marine environment through Traditional and Local Ecological Knowledge (TEK, LEK) passed on from generation to generation (Berkes, 1999, 2012; Berkes et al. 2000; Johannes, 1981; Johannes et al. 2000; Drew, 2005; Drew & Henne, 2006; Nunkoo, 2011) where sustainable marine practices, e.g. fishing, is a way of life that goes beyond the means to earning a living (Van Ginkel, 2001; Nunkoo, 2011) as shown in Figure 1. The Western Indian Ocean, Mauritius and Rodrigues seascape are ‘bio-cultural’ entities which include both the natural and cultural diversity of marine ecosystems and traditional coastal people (Figure 1).

Traditional and Local ecological knowledge (TEK, LEK), is defined as “a cumulative body of knowledge, practice and belief evolving by adaptive processes and handed down through generations by cultural transmission, about the relationship of living beings (including humans) with one another and with their environment” (Berkes et al. 2000) and there is today a growing appreciation of the value of traditional knowledge that can make a significant contribution to sustainable development (Adams et al. 2014; CBD, 2021a).

Although Mauritius was the first country to sign and ratify the CBD in 1992, there is a poor understanding of the islands’ Marine TEK which is under-researched; yet under Article 8(j) of the Convention, Parties are required to “respect, preserve and maintain knowledge, innovations and practices of indigenous and local communities embodying traditional lifestyles relevant for the conservation and sustainable use of biological diversity and promote their wider application”.

Marine TEK in Mauritius and Rodrigues is in fear of becoming lost (Johannes, 1978; UNESCO, 2021a,b) as fishers’ children no longer aspire to be fishermen and hence, the artisanal fishers who are the custodians, creators and transmitters of Marine TEK, are becoming an ageing population (Nunkoo, 2011).

By integrating Marine Conservation and TEK (Drew, 2005; Drew & Henne, 2006), this ethnoecological knowledge will make a significant contribution to the conservation and sustainable use of marine and coastal biodiversity in Mauritius, Rodrigues and the islands’ communities that highly depend upon them; safeguarding TEK for future island generations, two fundamental objectives of the CBD (Aichi Biodiversity Target 18 and Article 8(j), CBD, 2021a, 2021b); be invaluable for managing and conserving coastal, marine resources (Aichi Biodiversity Target 18, CBD, 2021; Aswani, 2014), in developing a TEK indicator and baseline; and can also make a significant contribution when planning Marine Protected Areas (MPAs) in data-poor (Johannes, 1998) SIDS such as Mauritius prioritising sustainable development, hence strengthening coastal community resilience through ecological, social and cultural diversity.

Johannes, R.E. (1981). Words of the Lagoon. Fishing and Marine Lore in the Palau District of Micronesia. Berkeley, CA, USA: University of California Pre

Thornton, T. F., & Maciejewski Scheer, A. (2012). Collaborative engagement of local and traditional knowledge and science in marine environments: a review. Ecology and Society 17(3): 8

UNESCO (2021a). Intangible Heritage - Knowledge and practices concerning nature and the universe http://www.unesco.org/culture/ich/index.php?lg=en&pg=00056 (accessed on 14.09.21)

UNESCO (2021b). Islands of the Future – Building Resilience in a Changing World. UNESCO, Paris. 44pp

United Nations, UN (2005). Mauritius Declaration and Mauritius Strategy for the Further Implementation of the Programme of Action for the Sustainable Development of Small Island Developing States (2005) [A/CONF.207/11]