Weekend Away from Hustle and Bustle

Being a Kathmanduite, I seldom get a chance to escape from my busy schedule to have a peaceful weekend. And when my acceptance letter to Beahrs Environmental Leadership Program at University of California, Berkeley came, I thought of it as an opportunity to get away from the hustle and bustle of the city to celebrate with my wife, Mamta and spend a weekend embracing the nature and enjoying the rural essence.

We chose Balthali as a weekend getaway destination. It lies 42 km southeast of Kathmandu, just beyond Panauti and Khopasi, places very rich in cultural and natural beauty. After returning from the office on Friday, we got on the local bus from Kathmandu at around 4:30 pm heading towards Panauti. We reached Panauti at around 6:30 pm after crossing the disturbances caused by the road and traffic jams. To our disappointment there weren't any local buses available, as the last one has already left at 6:15 p.m. We waited for about 20 minutes for any bus that will go to Khopasi along with a local girl who was also heading towards Balthali. But it was all in vain. We then hired a taxi to go to Khopasi for Rs. 500, which is around 3 km Southeast from Panauti and informed the people at Balthali Mountain Resort in Balthali to pick us in Khopasi, which they agreed happily.

As we reached Khopasi, a jeep came to receive us to take us to Balthali Mountain Resort. We bid farewell to the girl who was with us at the midway from Khopasi to Balthali and reached the resort at 7:30 p.m. We were so tired from the ride that we rested for about an hour and then went to have dinner in the dining hall. We could not explore the resort area, as it was already dark when we reached. The dining hall was spacious and ambient. Traditional folk music was playing in the hall and some people were dancing to the tunes of the music. There werea couple of groups of people that came for a weekend who were enjoying the dancing and the music along with us. We joined the group by clapping and encouraging the ones who were dancing. We had a dinner which was really tasty. I ate much more than usual to my wife's amazement. We then quickly went to the room to rest so that we can get a good sleep from an exhausting ride.

The next day, we woke up at around 6 a.m. in the morning and wash away our tiredness of the day before. There stood the bird’s eye view of green terraces, Panauti village and glimpses of the snowy Himalayan peaks in the North, innumerable rice terraces and rolling green forests from our bedroom. The sensation of fresh air was a reminder of what we had been missing in the city. After indulging in a shower, we walked around the resort, a small, cozy retreat. We had a delicious breakfast which refreshed us more and then went on a short hike around the Balthali village.

Exploring the beautiful trails and villages refreshed our senses and also instilled in us a sincere appreciation for simplicity and generosity displayed by the local denizens. The village is surrounded by visual delights of lush green terrace farms, orange plantations, pine forests and wild flowers in full bloom. Tamang villages, with their beautiful houses, dot the landscape. The inhabitants in their daily lives reminisce the remains of a bygone era. Humbled by the generosity displayed by the locals, we returned to our rooms to rest a while and then we went for a lunch, which was equally delicious as the dinner.

We returned to Khopasi via the jeep provided to us by the resort and then to Kathmandu from Panauti with lots of memories to cherish. 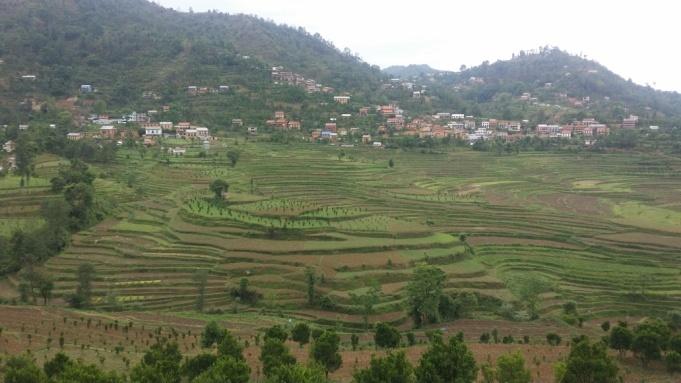